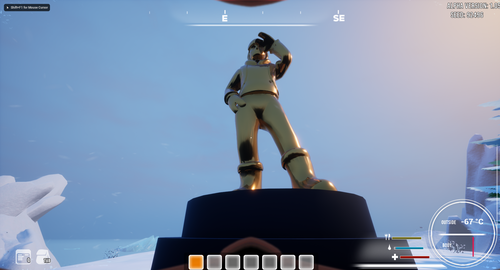 This week we have focused on improving player interactions in the game.

The time has come to announce, *drumrolls* The winners of our golden statue competition

First of all we want to thank everyone that entered the competition, it is so AWESOME seeing so many people playing the game and it really motivates us to work and deliver the best possible game we can. Now, if you are not one of the winners I can at least tell you the good news that we will have more competitions before the early access release so keep an eye on our weekly updates here at itch.io for when we are announcing the next competition.

A big shout out to the people that found all five statues, great work!

And now for our winners!

The first statue was found at the buoy, and the first person that found it was... Magni1200s! Congratulations to a future copy of the game when it reaches early access!

The second statue was found inside the ice labyrinth, and the first person that found it was... ExeBT! Congratulations to a future copy of the game when it reaches early access!

The third statue was found inside the giant snowman, and the first person that found it was... Mankej! Congratulations to a future copy of the game when it reaches early access!

The fourth statue was found at the top of a hill, and the first person that found it was... Lukas Kautonen! Congratulations to a future copy of the game when it reaches early access!

The fifth and final statue was found by the submarine, and the first person to find it was... Jambosasha! Congratulations to a future copy of the game when it reaches early access!

Slide function - We have implemented a slide function that can be used by pressing the “Control” key while sprinting. Please tell us what you think!

Snowmobile handling - As a lot of players have reported that they got stuck with their snowmobile we have worked intensely on making it harder for it to get stuck and also the feeling of driving it.

Snowmobile flip - If you flip the snowmobile you can now flip it back by interacting with it.

Crafting queue bug - we have solved a bug where the queue goes invisible if you leave and reenter the 3dprinter.

Updated quest description - We updated the quest text to fit the changes we have made.

Updated UX for Lootscanner WIP - We are currently overhauling the lootscanner, a new VFX has been added when finding loot.

Disabled cable save - We are currently experiencing bugs with cables when saving the game. We have temporarily disabled it while we work on fixing it. So right now you have to reconnect cables after loading a saved game.

HUD effects WIP - we have tweaked some of the HUD effects such as condensation on your goggles.

If the world became a cold arid place would you still be able to survive? Outpost is a game all about surviving the cold

Was this while walking around or riding the snowmobile? We'd be really happy if you could give us some more information.

We're trying to get on top of the bugs as they appear, we hope you have the patience to stick around and help us make the game great! :)

I was walking around because I heard that the snowmobile gets stuck really easily so I parked it on the side of the Hill. May I suggest a unstuck command that would put you next to the snowmobile if it's within a certain distance. And then if you're on the snowmobile and you get stuck it would just teleport you and what ever your riding away from where you're at. Possibly in the air and invulnerable to fall damage incase scripting the unstuck is too complicated to place the person on the train without falling through.

Was hoping the the storage box would be fixed. i had 2 one full another almost full i played it again i lost everything in them. i stopped playing it for now till its fixed. right now it lags so bad not much fun anyways. i get frame rates about 11 to 15 so not good.

What are your specs? might be helpful to the devs to know that.. My hardware is pretty old but it's buttery smooth.. I'm on a 1080ti which has been out for a long time now.. and and AMD FX processor which is also old..  not under powered but old..

I'm just curious be cause I've heard people mention FPS issues and so I think collecting that kind of information might help.

Are you playing on an old save?

I just started playing 8 days ago.

Do you play on your old save file? Do you load the game?

Same one, i tried to start a new game but it wont just loads same save. i tried it anyways i put something in a storage box saved it then left loaded it back up. i went and looked into the box again the item i put in was still in it so its saving now.